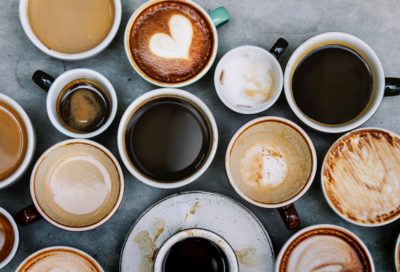 Coffee – The lifeblood of many. There’s just something special about waking up in the morning and smelling the freshly brewed pot of coffee. I know for us, it doesn’t quite feel the same if we don’t have coffee in the morning. But over the past few years, people have gone back and forth on the health value of coffee. This article will not be about coffee itself, more about what we include with our coffee.

I was never a huge mixed coffee drink fan. My coffee drinking days really didn’t start until college. With a tiny budget, I would always opt for the cheapest option, plain black coffee. I would add cinnamon or nutmeg and be on my way. It was a little surprising to me when I started to pay attention to just how much people were putting in their coffees.

Coffee by itself does not possess a large number of calories, roughly 5 – 10 calories in a medium cup. But, and this is a BIG ‘OL BUT, what you’re adding to your coffee could seriously be holding back your weight loss progress.

The most common mixers for coffee are sweeteners and dairy. These can come in the form of sugar, stevia, and chemicals (I mean Equal, Splenda & Sweet and Low). I don’t think I need to tell you just how bad excess sugar is for you. However, it is worth noting that these artificial sweeteners can be ever worse for you in the long run.

According to a Harvard Health article, these artificial sweeteners are exponentially sweeter than sugar. This can start to adjust how our brain registers sweetness when you eat. This can lead to us being less enticed by naturally sweet food such as fruit and even find “unsweet foods, such as vegetables, downright unpalatable.” The article also mentions that getting off these sweeteners might not be as easy as we think.

“Animal studies suggest that artificial sweeteners may be addictive. In studies of rats who were exposed to cocaine, then given a choice between intravenous cocaine or oral saccharine, most chose saccharin.”

The Dairy, or even non-dairy, creamers we add to our coffee can be just as bad as the sweeteners. While it has been put into law that all trans fats must be removed from food by June 18th, 2018, Some food companies were able to petition the FDA for an extension.

While companies like Nestle (makers of CoffeeMate) are working to remove hydrogenated oil from Original CoffeeMate there are still some that contain the harmful oil. When I ran a search for their timeline to remove all trans fats they published this page on their website titled “/removing-trans-fat-coffee-mate”… Oops

Hey, I get it, you’re in a hurry. Sometimes you don’t have a choice but to swing through Dunkin, or in the near future Starbucks. But, did you know just how much is in some of these specialty coffee drinks? For a reference, I have included 5 popular options at both Dunkin Donuts and Starbucks. To keep everything on an even playing field, all drinks will be Medium (Dunkin) or Grande (Starbucks) size. Brace yourself.

Oh yeah, NONE of those totals included whipped cream! If you add cream in you will bump those calories up another 70 – 80 calories.

You may be saying, “But those drinks have cream in them. If I get it with skim milk, I’m fine!” Well, the Caramel Swirl Frozen Coffee with Skim milk somehow has more sugar and is still 680 calories. If you would like to see where your favorite drink lands on the calorie scale I have included the full nutrition breakdown for Dunkin Donuts & Starbucks

If you do find yourself about to order at the drive through I have included a few alternatives to the waistline expanding examples above.

All of these drinks are at their starting point. Which means they do not have sugar or cream/milk in them, adding either will increase the calories. Even a Cold brew with cream and sugar is 140 calories less than the Vanilla Chia

I like to think of our coffee as “Almost-Zero” coffee since what we do add does not add calories, shocking I know! An added benefit, This coffee WON’T break your fast!

It’s a simple recipe with some powerful benefits. Ceylon Cinnamon is not your average cinnamon, but it is considered “True Cinnamon”. Most cinnamon you see in the grocery store is Cassia or Saigon cinnamon. While Cassia is spicer and probably closer to what you are accustomed to, it does contain higher levels of coumarin. Coumarin is a blood thinner and can cause liver damage in high doses. As long as you keep your intake under a teaspoon a day you should be fine with Cassia but just to be safe, I prefer Ceylon Cinnamon.

The Pure Stevia Extract is used to sweeten the beverage. When I said you need a tiny amount, I mean it. I’m pretty sure the serving size of the stevia extract listed above is around 40 mg. Just as a reference, a teaspoon is roughly 5 grams.

Also, be aware that products such as Stevia in the Raw and Truvia are usually mixed with dextrose. If you are fasting like we are, those will absolutely break your fast.

The salt is added to round out some of the bitterness that can be in the coffee and also adds some much-needed minerals into the mix.

Your challenge this week is to change up your morning drink order. While you don’t have to drink our exact recipe, using things such as cinnamon and pure stevia extract, instead of sugar, can be wonderful additions to your coffee.

If you frequently visit a drive-through window to get your morning Joe, try mixing up your order. Even the simplest changes can make a big change. We have one member who has eliminated putting creamer in her coffee and that has been enough to kickstart her weight loss.

Studio Fitness specializes in offering a guided approach to a stronger, fitter version of yourself. Studio Fitness will help you along your weight loss or body transformation journey. Whether you are just starting out, or are a seasoned exercise pro we have a class or trainer perfect for you.

Let us help you along your fitness journey in a fun, welcoming environment. At Studio Fitness we offer a wide variety of group fitness classes. From Spin to Barre to Circuit and H.I.I.T. we offer classes for all fitness levels. If you are ready to take your fitness to the next level, our awesome Certified Trainers are available. Your new life is waiting for you, what are you waiting for?

Open by appointment only